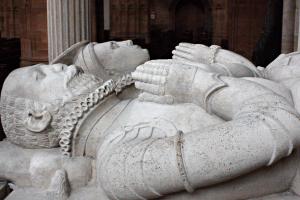 John Leweston’s father left him at death property in Leweston and elsewhere in Dorset, and provided for him (if the money was available) ‘as well to the court to London as to the grammar school’; the boy, who was only 15, became a royal ward and in July 1523 his wardship was granted to William Carent, head of a well-known Dorset family.5

Nothing is known of Leweston’s career (which presumably involved military experience) until in February 1546 he was appointed captain of the isle and castle of Portland: the appointment, which was subscribed by Sir John Russell, Baron Russell, was for life and his pay was backdated to 31 Dec. 1545. His office made him a man of considerable local importance and his first election to Parliament followed quickly. He was to sit three times for Melcombe Regis where his command at Portland doubtless made him an irresistible choice and on 1 Oct. 1563 he formally acquitted the town of his ‘burgess expenses ... in any of the Queen’s Highness progenitors’ time and from the beginning of the world’. In the first Parliament of Mary’s reign Leweston was one of those who opposed the initial measures towards reunion with Rome. For all his reputed Protestantism he was named to the Dorset bench in February 1554 and returned as knight of the shire to the Parliament which assembled two months later. He was nevertheless in some disfavour with the authorities during that year for in March he was bound in a recognizance of £500 to stay in London until further order, showing himself every day to some of the Council, and two days before the dissolution of the Parliament he bound himself in 1,000 marks for the safe-keeping of Portland castle. Although as a Member of the Parliament of 1555 Leweston does not appear to have joined the opposition headed by Sir Anthony Kingston against one of the government’s bills, he was again in trouble 18 months later and was temporarily replaced at Portland by George Strangways; but on 29 May 1557 the Council ordered his reinstatement, the Queen having been convinced of his ‘good conformity to God and their Highnesses’ service’ by Sir John Tregonwell and (Sir) Hugh Paulet. Re-elected twice under Elizabeth he retained his captaincy and position in local affairs until his death on 26 Apr. 1584.6