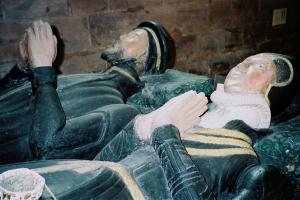 Richard Onslow derived his surname from a lordship within the town of Shrewsbury, where his forbears can be traced from the late 13th century. His uncle Humphrey Onslow, custos rotulorum of Shropshire, was a municipal benefactor, but although Onslow himself held property in the parish of Holy Cross, Shrewsbury, he took little part in the affairs of the town or county.3

Onslow’s career at the Inner Temple was marred by an affray in which he and others took part at the Autumn reading in 1556. The eight offenders were expelled from the fellowship and committed to the Fleet, but were pardoned and readmitted after making humble submission. Three of them, Thomas Copley, Thomas Lucas and Thomas Norton, all Protestants like Onslow, were to sit with him in the Commons in 1558. To this, his first, Parliament Onslow was returned for Steyning, a borough usually represented by nominees of the 12th Earl of Arundel, many of them lawyers. No direct connexion has been traced between Onslow and Arundel, but the Inner Temple could have provided several indirect ones, either through Arundel’s son-in-law the 4th Duke of Norfolk or through a local figure such as Sir Richard Sackville. Of Onslow’s part in the proceedings of the House all that is known is that on 22 Feb. 1558 he was licensed by the Speaker to ride to the assizes at Worcester where he was to appear as counsel. He may therefore have missed the speech which cost his associate Copley a spell of detention.4

Onslow’s speedy rise under Elizabeth was to carry him to legal eminence as recorder of London and solicitor-general and to parliamentary distinction as Speaker in 1566. He died while on a visit to Shrewsbury on 2 Apr. 1571. His widow married Richard Browne†.5