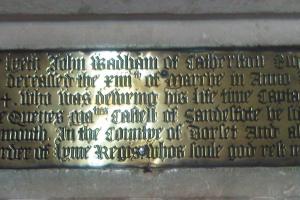 John Wadham received a legal education but he is to be distinguished from an older namesake (perhaps his cousin of Merrifield, Somerset) who studied civil law at Oxford; he does not appear to have practised as a lawyer although he was to succeed his father in the recordership of Lyme Regis. Presumably he gained some military experience during the 1540s before being appointed to one of the royal forts protecting Portland harbour, a command which made him a figure of authority in the neighbouring ports of Melcombe Regis and Weymouth. On his election for Melcombe in the spring of 1553 he discharged the borough of any payment for his parliamentary service and he probably did the same at Weymouth in the following year. Whether or no by his own choice, he was not to sit again for either borough although he kept his command until his death. After he inherited the family estates his interests in the neighbourhood of Bridport and Lyme absorbed most of his attention.4

In his will, dated 12 Jan. 1584, he composed the following inscription for his tombstone: Here lieth John Wadham of Catherston, esquire, who was during his life time captain of the Queen’s majesty’s castle of Sandsfoot besides Weymouth in this county of Dorset and also recorder of Lyme Regis, whose soul God rest to his good will and pleasure Amen.With the addition of the date of his death, 14 Mar. 1584, this was engraved on a brass plate in the church of Whitechurch Canonicorum. Wadham left 20s. each to the master gunner at Sandsfoot and all the garrison, 20s. to Richard Carpenter, town clerk of Lyme Regis, and £20 each to his younger sons. He left his eldest son and executor George Wadham burgages in Bridport, Charmouth, Dorchester, Lyme and Wareham, and named as overseers his ‘cousins’, Thomas Hannam†, Thomas Molyns the elder, William Pole, Nicholas Wadham and his servant William Crocker.5