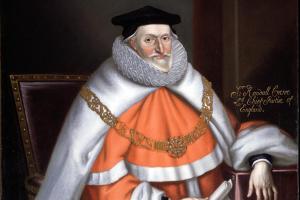 Of humble origin, Crew’s initial career was no doubt helped by his first marriage, to the Countess of Shrewsbury’s maid. A few days before the wedding, the 7th Earl wrote to Robert Cecil asking him to procure some venison for the celebrations. Crewe was a protégé of Lord Keeper Egerton, who was behind his return to Parliament in 1597. He served on several committees: for privileges and returns (5 Nov.), a bill about Arthur Hatch (22 Nov.) and the bill against lewd and wandering persons (20 Dec.). On 16 Jan. 1598 he was among those nominated to attend a conference with the Lords on the defence of the realm. He is not recorded as speaking in this Parliament.

In the new century, Crewe was concerned in many of the great trials of the day. He was eventually dismissed from the King’s bench for refusing to subscribe to the legality of forced loans. During the civil war his house was defended in the parliamentary cause. He died 3 Jan. 1646, and was buried at Barthomley in the chapel he had built. His financial situation had deteriorated as a result of his long retirement, his will containing many such marginal notes as ‘the plate and furniture is much impaired’, ‘the money is spent’, ‘he will have need of it, God knoweth’, ‘I doubt they [a basin and ewer] are gone’, and, alongside a list of bequests to the poor,

I had given many other legacies, but not now being able to perform them I must be excused and have taken out two of the sheets [of the will] before much razed.