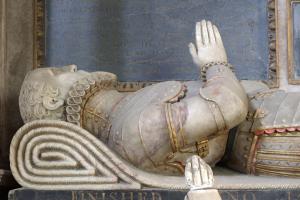 At the accession of Elizabeth, Dormer’s mother and his daughter, the Duchess of Feria, went abroad, but Dormer himself remained, his Catholicism notwithstanding. He retained his local county offices, was classified as a ‘hinderer’ of religion in 1564, and was elected knight of the shire in 1571, just when old Lady Dormer’s connexions with Sir Francis Englefield and other Catholic exiles was causing the government most embarrassment. Writing to the Duchess of Feria from Louvain in April 1570, Englefield described Dormer as ‘beset with heretics and breathing their spirit’. Englefield asked the duchess to write to her father: ‘It is thought one message from you would move Sir William more than 15 from us Louvainists’. More to the point, Englefield described the end Earl of Bedford as ‘the chief friend that ... [he] has, by whom he enjoys all that he now has’, and this is probably the key to Dormer’s freedom from penal measures, and to his election for the county in 1571. It speaks highly for Bedford’s friendship that he, a puritan, should support Dormer for the county when his own son had to take a seat at Chipping Wycombe. The only recorded activity found for Dormer in this Parliament is his membership of the subsidy committee, 7 Apr. His name was on a list drawn up in 1574 in the interest of Mary Queen of Scots, but he remained active in local affairs until his death, which occurred on 17 May 1575.

Dormer’s will mentions his manor house at Wing, his lodge in the park there, estates at Eythrope, Cranwell, Hughenden and elsewhere in Buckinghamshire and four chambers in the Savoy. His daughters Katherine and Margaret were to have £1,500 each at the age of 24 or at their marriages. The executors were the widow and Sir William’s surviving son Robert, and the overseers Sir Christopher Wray and Thomas Farmer alias Draper*. His widow founded an almshouse at Wing in his memory, and set up an elaborate monument to him in Wing parish church, where he is depicted in gilded plate armour, under an elaborate canopy with Corinthian pillars.2