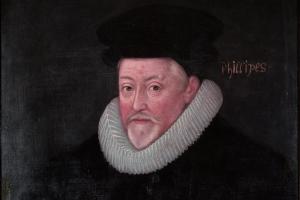 Phelips, the builder of Montacute, was a lawyer related to the Horseys of Dorset, and friendly with Thomas Gorges and (Sir) Walter Ralegh, though appearing for the government at the latter’s trial. He was first returned for Bere Alston, no doubt through the influence of the dowager Marchioness of Winchester, who in her will of 1586, left him £10, ‘for the good counsel he hath given me’. Another of his clients was the 2nd Earl of Pembroke, who was high steward of Weymouth, where Phelips was returned in 1586. His relative (Sir) John Horsey was sheriff of the county at the time and his uncle had represented the borough in 1554. Phelips’s return for Penryn in 1593 is difficult to explain. The patronage there was in the hands of the Killigrew family, who had some influence at court, and Phelips may have obtained the seat through a common acquaintance there, perhaps Sir Walter Ralegh, lord lieutenant of Cornwall and warden of the stannaries. After sitting for Andover in 1597, presumably through the influence of the Sandys family, Phelips achieved a county seat in 1601.

So far as is known Phelips was inactive in the Parliament of 1584. On 17 Mar. 1586 he was named to two committees, one concerned with the continuation of statutes, one with sheriffs. On 28 Feb. 1593 he spoke in favour of the bill against recusants and was appointed to its committee, and to that considering the subsidy. On 1 Mar. he was one of those chosen to discuss the subsidy with the Lords. In the 1597-8 Parliament he was named to committees concerned with rebuilding Langport Eastover (10 Nov.), the poor (22 Nov.), Arthur Hatch (22 Nov.), lewd wandering persons (20 Dec.), corporations (12 Jan.), defence (12, 16 Jan.), Sir A. Mildmay’s lands (16 Jan.) and Lady Mary Verney’s jointure (24 Jan.). In Elizabeth’s last Parliament he was named to the committee on the penal laws (2 Nov.), the main business committee (3 Nov.), and committees on the poor, law reform and alehouses (all 5 Nov.), the reform of the Exchequer (9 Nov.), clothworkers (18 Nov.), Severn harbour (21 Nov.), monopolies (23 Nov. and 11 Dec.), and prisoners in Ludgate (12 Dec.). On 7 Nov. he spoke in the subsidy debate, urging that the £3 men should be spared, and four subsidies be taken from the rich, to be termed a ‘contribution’ to avoid making a precedent. On 24 Nov. ‘he thought it a duty in conscience to offer to the consideration of the House’ a bill to explain the Act passed in 1597 concerning charitable uses. After the matter had been referred to a committee, Phelips drew up a bill to repeal the Act, which was opposed by Francis Bacon in the ensuing debate on 7 Dec. Phelips answered with ‘many persuasions for the bill and bitter answers to Mr. Bacon’, and desired that it should be put to the question whether the Act should be repealed by public act or private bill. Edward Glascock also spoke against Phelips,

so after long dispute till almost one of the clock, it was put to the question, whether it shall be repealed by the general law of repeal and continuance of statutes. And the most voices were ay, ay, ay, and so it was agreed.

Philips was re-elected for Somerset in the first Parliament of the next reign, and became Speaker, when he earned the reputation of being too closely aligned with the court. He died 11 Sept. 1614.