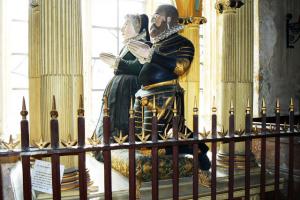 St. John’s protestantism served him well during Edward VI’s reign. As porter of Wallingford castle he was the subordinate of Sir Francis Knollys, the leading puritan in Queen Elizabeth’s Privy Council. In 1560 his services to Elizabeth and her predecessors were recognized by a grant of his court office, with a pension of £26 13s.4d. and exemption from daily attendance upon the Queen. He seems in fact to have confined his official duties to his native county of Wiltshire, where he became a justice of the peace and a commissioner to enforce training in archery. He contributed £25 to the Armada fund. In Berkshire, where he sometimes resided on his estate at Purley Magna, near Pangbourne, he was appointed trustee of part of the lands of the Catholic exile, Sir Francis Englefiel†.2

He was returned for Cricklade to the Parliament of 1563, presumably by arrangement with his neighbour, the 2nd Lord Chandos, who controlled the borough. In 1571 he sat for Great Bedwyn and in 1572 for Marlborough, both slightly further afield, no doubt through the nomination of the Earl of Hertford. As St. John was a country gentleman, he would not have been expected to claim payment for serving in Parliament, but in 1577, after the second session of the 1572 Parliament, he sued Marlborough in Chancery for his wages. The borough replied, falsely, that he had not attended in 1576, but they had to pay him £8 8s. and were reimbursed by Hertford. In fact St. John was quite active in his last two Parliaments. He spoke on the vagabonds bill (13 Apr. 1571), and served on committees concerned with dress (14 May) and corrupt presentations (25 May). In 1572 he spoke on fraudulent gifts (16 May) and again on vagabonds (20 May), the number of whom, he said, was

increased by building of cottages upon commons, having no grounds belonging unto them. He would therefore from henceforth no cottage to be builded unless it have three or four acres of ground belonging unto it.

St.John may have been quarrelsome and was certainly litigious. The impression given by his claim against Marlborough is supported by the note in his will that he had won an action for assault and battery against Giles, 3rd Lord Chandos, son of his presumed patron in 1563, and was accordingly owed money by him; he seems also to have had a dispute with the Webbs, the family into which one of his daughters married. The will affirms his belief that, saved by the merits of Christ and ‘by no other means whatsoever’, he would ‘be received into the holy company of [God’s] elect’, and he thanked God for ‘His gracious visitation’ in the shape of the disease afflicting him. His executor was his eldest son, John St. John, and he appointed as supervisors his brother-in-law Michael Blount and William St. John. He died 8 Nov. 1589. His second son, Oliver, became lord deputy of Ireland, an English baron and an Irish viscount; one of his daughters married Richard St. George, later Clarenceux King of Arms; and Henry St. John, Lord Bolingbroke, was his direct descendant.4