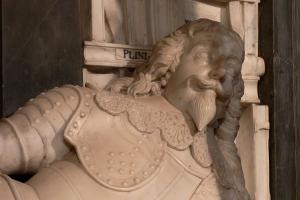 Owners of Charlecote from the late twelth century, the Lucys were one of Warwickshire’s oldest gentry families. Lucy’s grandfather, Sir Thomas, who rebuilt Charlecote in the mid-sixteenth century, was a major county figure, serving as sheriff, deputy lieutenant and, on three occasions, knight of the shire. Lucy’s father also became sheriff, though he was reprimanded by the Privy Council while in office for attempting to manipulate the 1601 Warwickshire parliamentary election.20 Both men greatly augmented their estates by marrying heiresses, and when Lucy’s father died in 1605, he and his wife between them owned land in eight counties, including around a dozen manors. Some of this property was held from the Crown in knight service, but although Lucy was aged only 19 when he inherited it, his early acquisition of a knighthood averted the danger of him becoming a royal ward.21

Lucy became a local magistrate not long after achieving his majority, but such responsibilities were not his immediate priority. By early 1609 he was travelling with his friend Sir Edward Herbert* in France, where his propensity for duelling obliged the English ambassador, Sir George Carew II*, to order his return home. Shipwrecked near Dover, he was rescued by Herbert, who remained on close terms with him thereafter.22 Through Herbert, Lucy was introduced to John Donne*, who became his regular correspondent, and the minor poet John Davies, who addressed a poem to him. Although never a major literary patron, Lucy probably knew Ben Jonson, Shakespeare and Michael Drayton, and at least one sermon was dedicated to him.23 He also possessed a remarkably eclectic library, which embraced the conventional classical authors, contemporary French publications, Christian opinion ranging from Catholicism to Scottish Presbyterianism, and even the Koran.24 His friendship with Donne, and his own brother William’s outspoken Arminianism, perhaps encouraged in him a tolerant religious outlook; one of the clergy he presented to Charlecote church was subsequently deprived for recusancy. Nevertheless, he supported the local preaching ministry, and cultivated a public image of moderate puritanism.25

Lucy served as sheriff of Warwickshire in 1611-12. Two years later, in the first parliamentary elections since he came of age, he was returned to Westminster as a knight of the shire. Named to the select committee to draft the Commons’ protestation against undertaking (13 Apr.), he was also appointed on 28 May to accompany the Speaker to the king after the House offended James by suspending business over Bishop Neile’s inflammatory remarks. His sole legislative committee nomination concerned a measure to prevent abuses in procuring legal process (18 May). Lucy’s first recorded speech was made on 7 June, when he argued against granting supply while the Parliament was threatened with dissolution.26 He subsequently contributed £20 to the 1614 Benevolence, but perhaps only under duress, as he was summoned before the Privy Council in November for some undisclosed offence.27

Lucy took a keen interest in national events. In 1615 he alerted Herbert to the imminent fall of the royal favourite, Somerset, and in later years he and his friend Sir Thomas Puckering* jointly employed a newsletter-writer to keep them abreast of current affairs.28 Nevertheless, his preferred arena was his own county, where he emerged as one of Warwickshire’s most able and assiduous administrators, both an active magistrate and a leading figure in the militia. This record of public service, when combined with his wealth, pedigree, ostensible puritanism, and attractive personality, afforded him an iron grip on one shire seat in Parliament throughout the 1620s, even though he made relatively little impact in the Commons.29 In 1621 Lucy received just three committee appointments, of which one was to review a bill against informers following an unsuccessful second reading, and another to examine petitions of grievance relating to courts of justice (21-2 February). He was also named on 8 May to the joint sub-committee of both Houses to iron out disagreements over the controversial Edward Floyd case. He may have been the anonymous speaker who offered evidence on 14 May on the local impact of Sir Robert Mansell’s* glass patent, but was not otherwise recorded during debates.30

In 1624 Lucy secured a double electoral success, winning a county seat for himself and providing his brother Francis with a place at Warwick.31 This time he was more active in the Commons, presenting Warwickshire’s solitary recusant office-holder on 27 Apr., and urging Members on 19 Mar. not to reach a decision on war finance without first carefully considering the country’s ability to pay.32 Once again named to the select committee to examine petitions about courts of justice (19 Apr.), he was also appointed to conferences with the Lords to agree Parliament’s advice to the king about breaking the Spanish treaties, to discuss England’s readiness for war, and to debate the monopolies bill (3 and 11 Mar., 7 April).33 Of the eight legislative committees to which he was named, he presumably took an interest in the bill confirming Prince Charles’s purchase of Kenilworth manor from Lady Alice Dudley (23 Mar.), as he helped to manage this kinswoman’s financial affairs.34 However, he did not attend the committee which scrutinized the bill against levying of fines in other men’s names (3 April).35

In the next two parliaments, Lucy again provided for his brother Francis at Warwick, but left little trace on the records of either assembly, in which as usual he represented his county. In 1625 he was nominated to three bill committees, whose subjects covered the taking of secret inquisitions, larceny, and subscription to the articles of religion (24-5 and 27 June).36 In the following year he attracted appointments to just two committees, to consider bills to establish a jointure for Lady Frances Neville, and to grant restitution in blood to Carew Ralegh (17 and 24 March).37

As a conscientious local governor who nevertheless favoured traditional low taxation, Lucy struggled to produce a satisfactory response to the Forced Loan of 1626-7, eventually paying his own contribution privately in London, but absenting himself from the Warwickshire commission. This public disavowal of the levy almost certainly helped him to retain his parliamentary seat in 1628, given the Loan’s intense unpopularity in the county.38 However, his interest at Warwick was temporarily eclipsed, as his friend Sir Thomas Puckering secured a seat there for himself, and Francis Lucy therefore had to wait until Puckering opted to represent another borough before gaining a place.39 Back in the Commons, Lucy was probably the anonymous speaker who on 24 Apr. reported that Warwickshire had no recusant officeholders. He was named to two select committees, to check the records about subjects’ liberties cited before the Lords by John Selden, and to draft a petition to the king requesting the payment of billeting expenses (21 May and 12 June). He was also appointed on 21 June to accompany the Speaker when he delivered the Commons’ offer to the king of a temporary Tunnage and Poundage bill.40 Of his four bill committee nominations, two related to the affairs of Carew Ralegh (23 May, 4 June), while a third dealt with the Council of Wales’s jurisdiction over the Welsh Marches, where much of Lucy’s property was situated (19 May). He played no active part in the 1629 session.41

During the following decade Lucy remained active in local government, holding the shrievalty for a second time in 1632-3. He helped to arbitrate in the 1635 dispute over Coventry’s Ship Money contributions, and four years later assisted in recruiting soldiers for the First Bishops’ War. Early in 1640, however, he was unexpectedly removed from the Warwickshire bench, possibly for opposing Ship Money, and avoided a further appearance before the Privy Council only by pleading ill-health.42 Elected at Warwick to both the Short and Long Parliaments, Lucy died in December 1640. He was buried in Charlecote church, where his monument depicts him reclining in front of a selection of his books. In his will, drawn up on 22 Sept. 1639, he bequeathed houses to three favoured servants, and a £30 annuity to a fourth. According to the preacher at his funeral, ‘he was a man accomplished and made up of all the contributions of art and nature, a man in whom concurred ... wit, beauty, riches, firm constitution of body and mind, such a brain, such an heart, as the most learned physician never saw’.43 Lucy’s sons Richard and Fulke both entered the Commons during the 1650s.