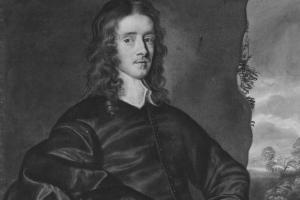 Booth was descended from a younger branch of a Lancashire family, settled at Dunham Massey since 1433. His great-grandfather represented Cheshire in 1572. His father died before the Civil War, but his grandfather was a parliamentary supporter, and he himself was in arms for the same cause, and sat for the county as a recruiter until Pride’s Purge. Clarendon described him as ‘a person of the best fortune and interest in Cheshire, and, for the memory of his grandfather, of absolute power with the Presbyterians’. During the national uprising against the Rump in 1659 Booth, who had been commissioned by the King as commander-in-chief for Cheshire, Lancashire and North Wales, was the only conspirator to get together anything like an army. He carefully avoided a public commitment on the monarchy, but was easily defeated by John Lambert, and captured in female attire when his disguise was betrayed by an unwary call for a razor.5

Despite the ludicrous circumstances of his defeat and capture, Booth’s reputation stood high in 1660, and he was returned for Cheshire at the general election, probably unopposed. Marked as a friend on Lord Wharton’s list, he was a moderately active Member of the Convention, in which he was named to 36 committees, including four conferences, acted as teller in five divisions, and made 17 recorded speeches. He was appointed to the committee of elections and privileges and sent to the Lords on 1 May to announce that the Commons were ready for a conference to settle ‘the great affairs of the kingdom’. He was among those instructed to prepare bills in accordance with the King’s letter. He absent-mindedly greeted Edmund Ludlow with great civility, but soon recollected himself enough to glare at him. He was the first Member chosen to carry the answer of the Commons to Breda. On his return to the House he acted as teller for the successful motion that no more than 20 offenders should be excepted from the indemnity bill. He defended Bulstrode Whitelocke†, acting as teller on 14 June against putting the question on excepting him, and offered a petition from Oliver St. John, the Cromwellian chief justice, which was refused. He twice acted as teller for imposing an import duty of £2 10s. a head on Irish cattle. On 30 July a bill was introduced to enable him to lease and sell lands for payment of his debts and raising portions for his younger children. It was read twice and committed, and immediately followed by a resolution to confer £10,000 on him out of the excise ‘as a mark of respect for his eminent services and great sufferings for the public’. He declared himself willing to forego the gift if his estate bill were passed, but he was overborne. The concurrence of the Lords was speedily obtained, and the excise commissioners ordered to make payment accordingly. With his credit thus re-established he was among those ordered on 13 Aug. to raise a government loan of £100,000 in the City. Four days later he was appointed to the committee to state the facts about the attendance of Charles I’s judges at his trial, and he helped to manage two conferences on the regicides. He brought in two papers drawn up by his late brother-in-law Lord Grey of Groby (Thomas Grey), who had died in 1657, ‘to testify his penitence for his former being against the King’, and persuaded the House to strike his name out of the bill. He also spoke on behalf of his old opponent Lambert, and Sir Arthur Hesilrige. He helped to manage the conference on settling ministers in their livings before Parliament adjourned for the autumn recess. In the second session he was named to the committee for the attainder bill, and acted as teller on the unsuccessful motion for a second reading of the bill for modified episcopacy.6

Booth was raised to the peerage as Lord Delamer in the coronation honours, but he cannot have welcomed the Anglican religious settlement and the lack of restraint on the prerogative. He retained his Presbyterian chaplains, however, and naturally came under suspicion. Attempts were made to implicate him in the northern plot of 1663. He was in opposition under Danby, entering three formal protests against the non-resisting test, and he voted for the second exclusion bill. He died on 8 Aug. 1684 and was buried at Bowdon.7