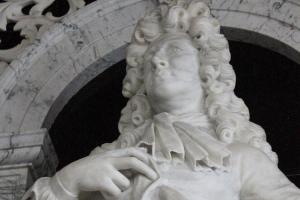 Spencer’s great-grandfather, a younger son of the Northamptonshire family, acquired ex-monastic property at Yarnton, four miles from Woodstock, about 1580, and his grandfather represented the borough in the first Parliament of James I. Spencer’s father, ‘a great Papist’, succeeded to a large but encumbered estate in Oxfordshire and Warwickshire. Although in trouble with High Commission in 1636 on a charge of scandalous living, he fought for the King in the Civil War. His early death seems to have freed the estate from sequestration without fine. Presumably, therefore, Spencer was brought up as a Protestant. In February 1660 he was one of those who presented the Oxfordshire petition for a free Parliament and he was returned for Woodstock at the general election, though under the Long Parliament ordinance his eligibility was dubious. In the Convention he was appointed only to the committees for preparing bills in accordance with the declaration of Breda, and for nominating commissioners of sewers. He was proportionately even less active in the Cavalier Parliament, in which he was named to three committees of elections and privileges, and to that for regulating brandy in 1670. He was twice sent for as a defaulter on calls of the House, and it is clear that his principal interests, like his father’s, were extra-parliamentary and afforded scope for the ribald mirth of his undergraduate neighbours at Oxford. His name appears on no list of the court party, but he was marked ‘thrice vile’ by Shaftesbury in 1677. By establishing a young lady of good family as his mistress at Yarnton, he exceeded the latitude usually accorded to gentlemen of the Restoration period, and in spite of his strong interest at Woodstock he does not seem to have stood again. At the opening of Parliament in 1681, he welcomed the King to Oxford at the head of his troop of militia, and a few months later accompanied Lord Norris with a loyal address from Oxfordshire. His temporary removal from the commission of the peace qualified him to serve on the jury which condemned Stephen College, the ‘protestant joiner’. Spencer died of apoplexy on 6 Mar. 1685, and was buried at Yarnton. Eighteen months before, his only surviving son on his deathbed had professed himself a Papist, but Spencer seems to have remained an Anglican, bequeathing an annuity of £3 to the vicar of Yarnton to read morning service according to the liturgy of the Church of England on the anniversaries of his birth and death. The baronetcy, but not the estates, went to an obscure Shropshire cousin. One of his four surviving legitimate daughters and coheirs married Robert Spencer; the other three sold their shares of the Yarnton estate in 1695 to Sir Robert Dashwood.3