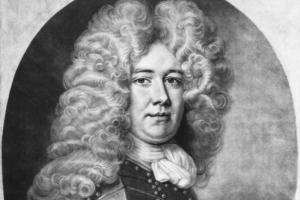 As a young man Crow was apprenticed to a Barbados merchant in London, eventually setting up on his own in the Mediterranean and Levant trades. According to his own account he spent some eight years living in Spain. This was probably during the 1690s, since in January 1697 he wrote to William III from Barcelona enclosing a paper by the Prince of Hesse, extracted from the archives of Aragon, concerning the right to the Spanish throne of the Austrian Emperor. Crow had probably returned to England by 1698, when he married the widow of a Barbadian colonel. By her first marriage settlement she had an annuity of £500 from an estate on the island and, at the death of her first husband in 1697, had been left sole executrix of his will. In December 1699 Crow unsuccessfully contested a by-election in Southampton against the town’s recorder, Roger Mompesson*, but was returned after a contest at the first 1701 election, holding onto the seat in the following November, when he was listed as a Whig by Robert Harley*. In February 1702 he was appointed governor of Barbados and had arranged his passage there, but after the accession of Anne, was superseded in favour of Sir Bevil Granville*, without ever having set foot on the island. As his grant was not cancelled until July 1702, his possession of this office may account for his failure to stand for Parliament in that year.4

Towards the end of 1704 Crow was invited to give his opinion on the best method of fomenting a rising in Spain in favour of the Archduke Charles. He advised Lord Godolphin (Sidney†) on 12 Dec. that the most effective means would be to send ‘a proper person fully empowered from her Majesty to Genoa or some other neutral post’ to negotiate with the Catalans. The following year Crow was despatched to Genoa as a special envoy, ostensibly to cover trade matters but in fact to report on the movements of the French fleet and make contact with the Catalans. He arrived in Genoa on 20 May 1705 and throughout June was sending home encouraging reports of the progress of the revolt. When a British force arrived at Barcelona, Crow joined them, remaining there until the following May, sending back what were now increasingly gloomy reports about the mishandling of relations with the Spaniards and the growing alienation of the Catalans. Crow returned to Genoa in May 1706 with a commission to raise money for the Archduke Charles, and remained there through the summer, receiving his salary up to 27 Aug. at the rate of £5 a day, with £500 for equipage and £330 for extraordinaries. In the meantime Godolphin, who had promised to assist Crow’s career, wrote to the Duke of Newcastle (John Holles†) on 15 June, in relation to securing for Crow the governorship of Barbados. This he did, and a warrant was issued on 28 Sept. While it was going through, Crow, who had returned to England by October, was appointed envoy extraordinary to Spain, apparently, as Luttrell recorded, ‘to settle the accounts of our army there, of which he is paymaster’. It is not clear whether Crow actually went to Spain, but he did set out for Barbados in the spring of 1707 and arrived there on 9 May.5

In December 1708 three members of the Barbados council made accusations of maladministration and bribery against Crow. He was ordered on 22 Aug. 1709 to return to England to answer the complaints, but did not embark until 15 May 1710. By the time he arrived the reconstruction of the ministry was in progress and his commission was superseded on 15 Aug. His case was heard by a committee of the Privy Council in November, which reported their opinion that the charges against Crow had not been proved. The report, together with three addresses from ‘the general assembly, clergy and inhabitants of Barbados in favour of Mr Crow’, led the full Council to dismiss the complaints as frivolous. After this Crow seems virtually to have retired from public life. He died on 15 Dec. 1719.6