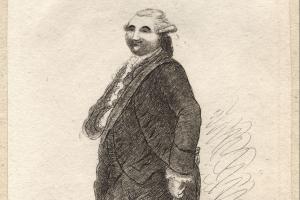 Disraeli in Sybil described Shelburne as ‘one of the suppressed characters of English history’. Of high intelligence, praised by Samuel Johnson as ‘a man of abilities and information’, open to ideas, he ‘acted like himself, that is, unlike anybody else’.1 A keen reformer, patron of Priestley, Bentham, and Richard Price, he was an aristocratic forerunner of the ‘philosophic radicals’. He had some real friends among those who knew him best, but generally was disliked by men of his own standing, social or political, and especially by those who served under him; and hardly any contemporary character sketch does him justice. Ambivalent to an excessive degree, both emotionally and intellectually, he was difficult to work with: of great activity, both timid and rash, ‘he was never satisfied with what anyone did, or even with what he did himself, but altered and changed without end’.2 Similarly in his human relations there were sudden reversals: both submissive and domineering, tense yet cold; generous with a good deal of ‘intelligent sympathy’ and an admixture of ‘what was factitious’;3 an acute observer but with poor human contacts and often of an ‘impolitic insensibility’;4 in trying to control an aggressive temper, elaborately polite: he is described by George Rose as ‘sometimes passionate or unreasonable ... and at other times offensively flattering’.5 The deeper contradictions and involutions of his character made him appear insincere: he was distrusted, and his political career was wrecked by his unpopularity.

Shelburne was burdened with a childhood and youth more than usually unhappy, and, having acute insight into character (even into his own), was conscious of the burden. He wrote in December 1801, aged 63:

I have dwelt on the manner in which I passed my early years, because it cost me more to unlearn the habits, manners, and principles which I then imbibed, than would have served to qualify me for any role whatever through life. I am conscious of the force of several of them to this hour, which I have not been able to root properly out ... Arrived at the age of sixteen I had nobody to teach me, and everything to learn, of which I was fully aware, but I had, what I was not at all aware of, everything to unlearn; no such easy matter.

It became necessary for me to take some resolution for myself; home detestable; no prospect of a decent allowance to go abroad, neither happiness nor quiet. The war broke out; I determined upon going into the army; luckily, my father, by the advice of Mr. Fox, placed me in the 20th Regiment, where I came under General Wolfe.6

Fitzmaurice (as he then was) distinguished himself in the battles of Minden and Kloster Kampen. While still abroad, he was returned on 2 June 1760 for the seat at Chipping Wycombe which his father had held until created a British peer. In the new reign, in December 1760, aged 23, Fitzmaurice was made a colonel and aide-de-camp to the King: letters from him to Bute written in 17597 point to an earlier connexion between them. To quote his autobiography once more, ‘it has ... been my fate through life always to fall in with clever but unpopular connexions’.8 On his return to England he became the link between Bute and Fox; and, with Fox for prompter and mentor, he assisted Bute in preparations for the general election of 1761: prodded him to act, primed him with information to use in arguments with Newcastle,9 and transmitted to him offers of seats and suggestions with whom to fill them. Among Fitzmaurice’s papers at Bowood is a list of the parliamentary representation of England and Wales at the end of 1760, annotated by him with remarks concerning the dominant interests in the constituencies, the candidates, their chances, etc.; and among George III’s papers at Windsor a list of Members, torn out of an almanac for 1760, is interleaved with blank pages on to which Fitzmaurice’s remarks are copied by the King. There is also at Bowood a list of ‘ministerial boroughs’, of ‘venal boroughs’, and of contests at the general election. A great deal of the information must have come from Fox, as did most of Fitzmaurice’s suggestions for Bute’s intervention in English elections: it was through Fox that George Selwyn offered the two seats at Ludgershall to Bute, and the candidates, Whately and Paterson (the latter solicitor both to Fox and Fitzmaurice) were presumably their joint choice. At Hindon the initiative came undoubtedly from Fox, who, had old connexions with the borough, but William Blackstone was Fitzmaurice’s candidate. Again at Midhurst and Dunwich, discussed in Fitzmaurice’s letters to Bute, Fox was the election manager.

Fitzmaurice himself, re-elected without contest, succeeded to the peerage half a year before the Parliament of 1761 met in regular session, and thus passes beyond the purview of this work except for influence exercised vicariously, in the first place through Members returned for the three seats under his control, one at High Wycombe and two at Calne. His choice of Members outside his family circle is significant: Barré, John Calcraft, Dunning, James Townsend, Lord Mahon, and Jekyll—except for the last, each a remarkable, though not necessarily a pleasant personality; a selection unequalled by any other borough patron during the period.