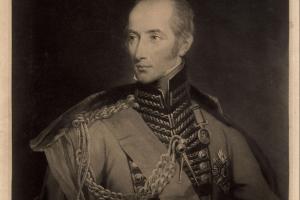 Like his elder brother, Clinton became a professional soldier. As such he proved the abler of the two. He served as aide-de-camp to the Duke of York in Flanders and was wounded at Camphin, 10 May 1794. While returning from the West Indies in 1796 he was temporarily a French prisoner. In 1798 he served Cornwallis in Ireland. His marriage to Lord Elcho’s daughter got him into professional difficulties as she would not be parted from him and pursued him to Switzerland when he was appointed military assistant to William Wickham* in 1800. The latter complained that she kept Clinton in bed when he should have been in battle—and also of his placing confidence in Lord Mulgrave, rather than in Wickham. The King nevertheless regarded Clinton, like his brother, as a credit to his profession. In 1802 he proceeded to India for three years. He served at Austerlitz and in Sicily.1

In 1807 Clinton was his father-in-law’s unsuccessful candidate for Haddington Burghs (Elcho had been planning this for two years).2 Early in 1808 he joined his brother as the 4th Duke of Newcastle’s Member for Boroughbridge. As he proceeded to Sweden and Portugal with Sir John Moore, whose apologist he was after Corunna, he cannot have been a good attender in Parliament. In 1809 and 1810 he served in Ireland. He supported administration and was present in the session of 1810, voting with ministers on the address, the Scheldt inquiry, the discharge of Gale Jones, Apr., and against parliamentary reform, 21 May. The Whigs regarded him as doubtful from their viewpoint. He also voted with ministers on the Regency, 1 Jan. 1811. He joined Wellington in the Peninsula in October 1811. He was conspicuous in the Salamanca campaign and on 3 Dec. 1812, in his first known speech, acknowledged the thanks of the House for his services. In that Parliament he was listed a Treasury supporter. He obtained a red ribbon for his services at Vittoria. After sick leave, he returned to distinguish himself at Orthes and Toulouse and acknowledged the House’s thanks on 24 June 1814. After service at Waterloo, loaded with honours by the allies, he did likewise, 20 May 1816. Only one vote of his is known in that Parliament, against Catholic relief, 21 May 1816. In the spring of 1817 he was ‘very ill’ at Lyons.3 He did not seek re-election in 1818. He died at his country retreat, Ashley in Hampshire, 11 Dec. 1829.