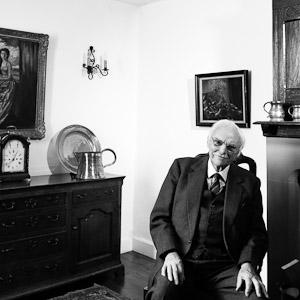 Michael Norman Shaw was born in Leeds on 9 October 1920. Educated at Sedbergh School he joined the Indian Army on the outbreak of war, but contracted Tuberculosis on the voyage out. Discharged from the Army he joined his family firm as a chartered accountant. He married Joan Mowat in 1951.

Shaw became involved with his local Conservative Association. In 1959 he fought the election for Brighouse and Spenborough on behalf of the Conservatives, but lost by a small margin. Shaw won the seat the following year in a by-election after his rival suddenly died, but lost it again in 1964. In 1966 he became MP for Scarborough and Whitby and in 1974 he was elected to the new constituency of Scarborough, which he represented until 1992.

Between 1974 and 1979 Shaw was a Member of the European Parliament, working particularly on the European budget. He was made a life peer in 1994 as Baron Shaw of Northstead.

"Just after the end of the war, where I lived was called Spen Valley. It had always been a national government seat, and the Conservatives and Liberals had agreed that the Conservatives wouldn’t oppose the Liberal candidate, the Liberal candidate of course was a National Liberal candidate. That didn’t prevent an Independent Liberal standing as well. Then I’m afraid in 1945 Labour won the seat and continued to hold it until 1960. I became interested because I remember when the Conservative party set up an organisation in the constituency they came to the village called Gomersal, which is in the constituency… and called together to see if there were any Young Conservatives, so my mother said you’d better go along to that, so I duly went along and to my astonishment found myself coming out as chairman of the local branch…. I became eventually chairman of the constituency YCs, and then I became chairman of the Yorkshire area YCs, and then I gave that up because by that time we were changing the constituency slightly and we were trying to get together with the National Liberals to have one united association, which we did, and I was the chairman of it. And then it came to 1959, well before that, we were desperate to have a candidate, and they said ‘well come on, Mike, why don’t you have a go?’ So I did, and I got him down to about 60 I think it was, but he won…. He died the following year, in Strasbourg… and so there was a by-election. I’d already told my partners I’d finished with politics, now I’ve done my stuff, but I’m afraid everybody said, ‘no, you’ve got to carry on’. So I did. And I won."

Click here to find this interview in the British Library