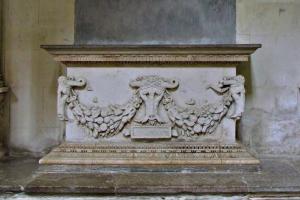 The Dormers of Buckinghamshire and Oxfordshire were prosperous wool merchants. Robert Dormer probably gained experience in the family business with his uncles Michael and Peter Dormer, merchants of the staple: he was admitted to the Mercers’ Company by redemption in 1514. In the following year he increased his grazing facilities by the purchase of the manor of Wing from Sir Maurice Berkeley, but he continued to dwell for a few more years at West Wycombe. In 1517 he negotiated for a London house in the parish of St. Thomas Apostle which remained in his ownership until 1550 and he had a chamber at the Inner Temple by 1537. He had settled at Wing by 1524 when he was assessed for the subsidy there on goods worth £233.3

Dormer’s return to the Parliament of 1529 for Chipping Wycombe answered to his standing in the neighbourhood but may none the less have been due to a royal nomination. Buckinghamshire was one of the counties for which Henry VIII ordered the writs to be sent to him and Dormer could have profited from his relationship with the King through his Wydevill mother; his fellow-Member William Windsor was a courtier whose father was chosen a knight of the shire for Buckinghamshire. Both the Members for Chipping Wycombe appear on a list drawn up by Cromwell in the spring of 1533 and believed to be of Members opposed to the bill in restraint of appeals. Like his kinsman John Poyntz, Dormer might have taken this stand either on religious grounds or for fear that the bill would damage the cloth trade with the Netherlands. He appears on a further list compiled by Cromwell on the back of a letter of December 1534 and thought to be of Members having a particular, but undetermined, connexion with the treasons bill then passing through Parliament, perhaps as a committee.4

A further piece of evidence concerning Dormer’s parliamentary career is both more explicit and less trustworthy. It is a statement made by Henry Clifford, in the Life of Dormer’s granddaughter, Jane Dormer, that

this good knight showed his zeal to God his truth. For when he saw the course and purpose of the King in his Parliament to carry all matters according to his passion ... he avoided by all means to be a Parliament man; for being chosen by his county to be knight of the shire, he refused it and resigned it over to another, persuading the county that so it was best for them.

Such a claim, appearing a century or more after the event and in a eulogy of Jane Dormer’s Catholicism, might be dismissed as a pious fabrication, especially as it is difficult to reconcile with at least some of the facts. If, as is likely, it was intended to apply to the Parliament of 1529, Dormer did not ‘avoid’ Membership. If, on the other hand, it is a later election which is in question, the episode becomes still harder to accept: granted that in 1536 and, to a lesser degree, in 1542 the summoning of Parliament was influenced by the King’s ‘passion’, the circumstances were not such as to affront religious conservatives. Yet before the story is rejected out of hand, it is worth remembering that there was an election in Buckinghamshire between 1529 and 1536. It was the by-election held to replace Sir Andrew Windsor as a knight of the shire after his elevation to the peerage in December 1529. Unfortunately, all that is known of this by-election is that it took place, as did all the others, after the middle of 1532: who was returned remains uncertain, with Sir Francis Bryan and William Windsor as the most likely choices. This would have been the opportunity for an invitation to be given to Dormer to fill the vacant place and for him to have declined it. Whether, as in the story, he would have done so as a form of protest is perhaps to be doubted, and that he remained in favour at court is shown by the knighthood apparently conferred on him by September 1535 15 when he was styled Sir Robert in a letter to Cromwell.5

Dormer himself corresponded with Cromwell and his son may have been in the minister’s service. As a Buckinghamshire knight Dormer attended the ceremonies for the reception of Anne of Cleves in 1539. He was styled ‘the King’s servant’ in 1544 when he bought from the crown the rights of a second manor in Wing called Ascott for £346: as the description is not found elsewhere, it may refer to the vice-treasurership of the rearguard of the army in France which he held in that year.6

The profits of Dormer’s calling were invested in landed property in Buckinghamshire and included the manor of Ilmer which was held by the sergeanty of serving as marshal and keeper of the royal falcons. By his will of 20 June 1552 he left all this estate, subject to the life interest of his wife, to his son William. He died at Wing on 2 or 8 July and was buried, according to Machyn, on 12 July, as ‘a great sheep master in Oxfordshire’. A monument with an inscription was erected in Wing church.7