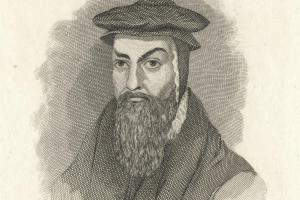 John Hales, one of a large and important family of Kent, received his early training in the household of a distant relative, (Sir) Christopher Hales, attorney-general and master of the rolls. In 1534, after some nine years in this service, he wrote to Cromwell that he had received no reasonable gain and that, on wishing to leave his master, he had been dismissed with little prospect of recommendation to others; he asked therefore to be allowed to enter Cromwell’s service. By the following year the request had been granted and Hales was dealing with compositions for first fruits and tenths with Henry Polsted, another servant of the minister. The next five years’ work for Cromwell in this and other matters were to set the pattern of Hales’s career and to see the beginning of his lifelong association with Ralph Sadler.[footnote]

The existence of several men in the family bearing the christian name John gives rise to some problems of identity. The groom of the chamber in 1538 could have been the Member, but the principal auditor in the court of general surveyors in 1537, who has been taken to be Hales of the first fruits, may have been John Hales I, baron of the Exchequer and a cousin of Christopher Hales the attorney-general.[footnote]

Early in 1537 Hales was appointed clerk to (Sir) John Gostwick, treasurer of a new department dealing with first fruits and tenths. He was soon assisting Sadler at the hanaper; by 1541 he was known officially as Sadler’s deputy and in 1545 they received a joint patent of the office. The hanaper accounts show that Hales not only bore the brunt of the work but was also occupied in business in the wardrobe for Sadler. With improved fortunes Hales began to acquire property; in 1541 he obtained from Richard Morison, brother-in-law of his brother Stephen, the priory of St. Mary without Bishopsgate, London, and there followed two years later his first purchase of ex-monastic property in Coventry, where he had previously acted as Sadler’s attorney in land transactions. Hales used part of the Whitefriars property in Coventry to build a house called Hales Place, and to set up a school in the choir. In 1545 he was licensed to establish this school as Henry VIII’s free school in the former St. John’s hospital in Coventry, with lands to the value of 200 marks for its upkeep.[footnote]

Hales’s first important literary work was written during his temporary unemployment after Cromwell’s death. Between 1540 and 1542 he addressed to Sir Anthony Browne an ambitious work entitled ‘Oration in commendation of the laws’, expressing the hope that it would be shown to the King. During these years he also wrote an introduction ‘ad grammaticam’ and a ‘highway to nobility’, and he translated Plutarch’s ‘precepts for the preservation of health’. At the time of Hales’s request to purchase the lands in Coventry on the understanding that he would support the foundation of a school in the town, his sponsor (Sir) Anthony Denny informed Henry VIII that he was ‘a very good scholar and a lover of learning and learned men’.[footnote]

A sincere Protestant, Hales doubtless owed his advancement under Edward VI to his friendship with Sadler, himself a friend of the Protector Somerset and from March 1547 a Privy Councillor. Hales was returned to Parliament in the following autumn for Preston, a duchy of Lancaster seat formerly shared by Sadler. His appointment in June 1548 as one of the six men charged with the important enclosure commission for the midland counties came, according to his own statement, as a surprise to him, but he began to display great interest in economic problems, especially during the second session of the Parliament. Two bills were committed to him after their first reading, one for the relief and the other for the release of fee-farms.[footnote]

He did not make much progress, however, with three bills concerning husbandry, regrating and the discouragement of sheep farming. There survives what appears to be a draft of the first bill, possibly in Hales’s hand. This was almost certainly the ‘great book of husbandry’ read by Chancellor Rich in the latter part of December 1548 before being submitted to either House, but its subsequent history is unknown: Hales’s statement that ‘being read [it] was not liked’ could refer to an unrecorded reading in the Lords or to this preliminary scrutiny by Rich. The second bill, on regrating, was passed by the Lords on 24 Jan. 1549 and immediately sent to the Commons where, after a first reading on 26 Jan., it was rejected, after much debate, on its third reading on 12 Mar. The third bill, which also appears to survive in draft, received a first reading in the Commons on 26 Nov. 1548 and another first reading on 9 Jan. 1549; after a second reading on 16 Jan. and committal to Sir William Paget, it was replaced by a new bill which was rejected on 23 Feb. after a third reading on the previous day. Hales maintained that this bill failed because he had provided for its enforcement through an annual survey: ‘Men pass [care] not much how many laws be made, for they see very few put in execution.’[footnote]

The active interest in economic matters which Hales showed in his correspondence and writing led the Kentish antiquary William Lambarde† to report that he, rather than Sir Thomas Smith, was thought by some people to have been the author of the Discourse of the commonweal of this realm of England, first printed in 1581, but written in 1549. It is now established almost beyond doubt that Smith wrote this celebrated treatise, which all that we know of Hales suggests was beyond his intellectual and literary competence.

After two years' support of Somerset's policy Hales was caught up in the fall of the Protector and imprisoned in the Tower on or after 22 Oct. 1549. Liberated in 1550, but feeling insecure, he prepared to go into exile by selling lands in Warwickshire to his brother Stephen and enfeoffing Sadler and others with his property in Coventry. On 2 Feb. 1551 he obtained a licence to leave the country with, or to follow, Sir Richard Morison, sent ambassador to Charles V. He remained abroad consorting with the reformers from Germany from the end of April 1551 until the accession of Elizabeth. He began a friendship with Sturmius of Strasbourg, to whom he came with a recommendation from Roger Ascham which described him as instructed in the true religion, experienced in public affairs, a scholar in French, German, Greek, Italian and Latin. Much of his time was spent in Frankfurt where he was joined by his brother Christopher and became involved in the religious dissensions of the exiles. In July 1556 he resisted a summons from Queen Mary to return to England.[footnote]

Under Elizabeth, Hales regained his post at the hanaper, sat a second time in Parliament and suffered a further term of imprisonment for writing a tract on the succession. He died on 26 Dec. 1572.[footnote]