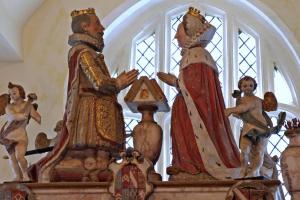 As his father’s son, Knollys was launched early upon a career in the Commons. His return for Stafford in 1571 he presumably owed to Walter Devereux, lord lieutenant of Staffordshire and soon to be Earl of Essex, who had married Lettice, Knollys’s sister. In 1572 he sat for Tregony, probably through the patronage of the 2nd Earl of Bedford, who supervised the Cornish elections in that year. Knollys’s fellow-Member was Peter Wentworth, but despite his parentage, education (under Julins Palmer and Laurence Humphrey) and connexions, it can be stated at once that Knollys’s life shows no evidence of any religious views beyond conventional adherence to the established church. In 1584, following the death of his elder brother Henry, he was chosen knight for Oxfordshire along with his father; and in 1597 he succeeded Sir Francis as senior knight. Between 1584 and 1593 there is a gap in Knollys’s parliamentary career caused by his service abroad as an emissary and as a soldier under the Earl of Leicester, Lettice Knollys’s second husband, by whom he was knighted. The parliamentary journals do not mention Knollys until 1l2 Dec. 1584, when he was named to a committee concerning sheriffs. During the same Parliament he was also appointed to a conference with the Lords on the fraudulent conveyances bill (15 Feb. 1585). In 1593 he was more active. On 26 Feb. he was appointed to the subsidy committee as a knight of the shire; on 1 Mar. he was named to the subsidy committee, and on 3 Mar. he was on a delegation from the Commons to the Lords concerning the subsidy. He was also appointed to committees on cloth (9 Mar.), spinners and weavers (26 Mar.) and recusancy (4 Apr.); and he was entitled to attend a legal committee as a knight of the shire on 9 Mar. A bill against forgery was committed to him on 13 Mar.

Within a week of his father’s death Knollys applied for the treasurership of the Household. He would serve under Lord North as comptroller, but declined the vice-chamberlainship, which he heard was intended for him. Knollys had to wait until 1602 for the treasurership, but within a few weeks he became comptroller and a Privy Councillor. As such it fell to him to nominate the Speaker at the opening of the 1597 Parliament, which he did in such a manner that the House ‘hawked and spat’. He was appointed to over as committees through being comptroller, Privy Councillor and knight of the shire. Their subjects included enclosures (5 Nov.), poor relief (5, 22 Nov.), rogues and vagabonds (5 Nov.), privileges and returns (5 Nov.), penal laws (8 Nov.), monopolies (10 Nov.), the subsidy (15 Nov.), several private bills, defence (8 Dec., 12, 16 Jan., reported by him 16, 24 Jam.), excess of apparel (19 Jan., reported by him 7 Feb.) and tillage (20 Jan.). His speech on the church attendance bill, 2 Dec. 1601, defending the powers of j.p.s was prophetic. He was sorry that

after forty-three years under her Majesty’s happy government, that we should now dispute or commit a bill of this nature. And I wonder any voice durst be so bold or desperate to cry, Away with this bill. The old statute gives the penalty, this new one only speedy means to levy it. And I much marvel that men will or dare accuse justices of the peace, ministers to her Majesty, without whom the common-wealth cannot be. If this boldness go on, they will accuse judges, and next the seat of justice itself. That all justices should be thus generally accused, this is mere barbarism indeed; when her Majesty shall have understanding thereof, it will be no contentment unto her, and a scandal unto us all.

The bill, however, was committed the same day, and Knollys, as a Privy Councillor, would have had to attend the committee.

There were a number of exchanges between Knollys and Cecil during this Parliament. They took opposite views on 9 Dec. when Cecil was incensed by allegations that Members were reluctant to leave the chamber to vote for fear of losing their places. Cecil wanted Richard Martin to stand at the bar. Knollys, however, who had voted with Martin on the tillage bill in question, defended him:

... the gentleman that spake, Mr. Martin, brake no order of the House for speaking, for the House favoured him with silence and therefore admitted to him liberty of speech ... And surely for not removing out of places, I have heard fault found before this time, and therefore the gentleman is not now to be taxed.

However, he supported Cecil’s proposal that the House should sit in the afternoons for the rest of the Parliament, and, next day, it was Knollys rather than Cecil who rebuked the House over a proposed change of agenda:

I am sorry to see this confusion in this House; it were better we used more silence and kept better order. Yesterday you ordered the continuance of statutes should be read; now in an humour you cry, Ordnance, Ordnance. I pray you that which we first decreed let us stick to, and not do and undo upon every idle motion.

A few days later, however, a Member was forcibly prevented from voting on the church attendance bill. Ralegh could see nothing wrong in this, and admitted having held back a Member by the sleeve on several occasions himself. Knollys thought it an ‘intolerable disorder’.

I do think the offence an heinous offence, both against God and this assembly. For the first in that every man is to go according to his conscience and not by compulsion. And for the other gentleman (meaning Sir Walter Ralegh) that said he had often done the like, I think he may be ashamed of it.

He was thought to suggest that Ralegh be brought to the bar and was rebuked by Cecil for his ‘imperiousness’. At the same time Knollys was a stout defender of the royal prerogative. A Member who proposed entering the Queen’s message on monopolies in the journals ‘exceedingly forgot himself’ (27 Oct.). He argued (8 Dec.) that a bill intended to destroy a monopoly in the sale of ordnance was not consonant ‘with respect or duty’ and ‘herself and her prerogative will not be forced’. He spoke on a variety of different topics including privileges and returns (4 Nov., appointed to the committee 31 Oct.), penal laws (2 Nov.), the order of business (3 Nov.), the subsidy (7 Nov.), cordage (26 Nov.), Dover harbour (10 Dec., appointed to the committee 14 Dec.), relief of the poor (10 Dec., appointed to the committee 10 Dec.), and he gave a character reference in the Belgrave privilege case (17 Dec.). Further committee work included topics such as Exchequer reform (9, 21 Nov.), customs regulations (10 Nov.), the abbreviation of the Michaelmas term (11 Nov.), the confirmation of letters patent (12 Nov.), insurance (13 Nov.), pluralities (16 Nov.), monopolies (23 Nov.), defence (3 Dec.), Dunkirk pirates (3 Dec.), a private bill (12 Dec.) and a legal bill (12 Dec.).3

Except for a note by the Earl of Essex in 1596 that Knollys had been a captain of horse and was ‘fit to be employed’ in that capacity, there is nothing to suggest that Essex did anything for his uncle; but it is clear that until the final act of treason, Knollys was for Essex and against Cecil. Yet it was an insolent reaction by Essex to the Queen’s proposal that Knollys should take command in Ireland which caused her to box the Earl’s ears. At first Knollys declared himself ‘confounded’ at relations between Essex and the Queen, but on Burghley’s death in August 1598 he warned Essex not to leave the court at such a time and not to show a ‘careless humour’ to the Queen. Later that year he tried to mitigate the harshness of a message from Elizabeth to Essex and again urged Essex to attend more regularly: ‘by your lordship’s coming there will be a speedier end; but whether good or bad I cannot divine’. There is no record of correspondence between uncle and nephew during Essex’s time in Ireland, a period when Knollys was much occupied with the Netherlands.

After his trial in June 1600 for his conduct in Ireland, Essex stayed with Knollys in Oxfordshire, but at the time of the final rebellion, Knollys was saved a conflict of loyalties through being imprisoned in Essex House with the chief justice and the Earl of Worcester when sent to arrest the Earl.4

The rift between Knollys and Cecil and the former’s alignment with Essex is apparent, on a smaller canvas, in the struggle for the high stewardship of Reading which took place after Essex’s execution. In August 1601 a Berkshire supporter informed Cecil that he (Cecil) had been chosen by the majority of the wealthier townsmen, but opposed and slandered by a faction which wanted Knollys; the faction included the mayor, who refused to declare the majority’s choice. Eventually Knollys was appointed. In part he was inheriting Essex’s patronage, but at Reading, as at Oxford, where Knollys succeeded Egerton as high steward in 1611, Essex’s influence had been partly due to his relationship to the Knollys family. To the end of his life Knollys nominated one Member at Reading, but there was always a strong faction against him which successfully resisted his efforts to choose both; at Oxford after 1611 he nominated one. He may have been also the patron of some of the Wallingford Members and in 1601, at the height of his influence, he was able to get Ralph Warcoppe returned as the second knight for Oxfordshire. On Lord Norris’s death in 1601—at the funeral Knollys quarrelled scandalously with (Sir) Edward Norris over the stewardship of Sonning—he ousted the Norrises from the lieutenancy of Oxfordshire and Berkshire.5

The great contest for power between the factions of Essex and Cecil, which Sir Walter Ralegh was to remember on the day of his own execution, was not Knollys’s only diversion at court. When Mary Fitton became maid of honour to the Queen about 1595, her father committed her to Knollys’s protection, who promised to defend ‘the innocent lamb from the wolvish cruelty and fox-like subtlety of the same beasts’ of the court. Knollys of course quickly became infatuated with her. Tied to an old wife, he fluctuated between despair and hope, encouraged both by Mary and by her sister, Anne Newdigate, to whom Knollys wrote a series of highly injudicious letters. However, when Mary Fitton’s pregnancy became known, at the beginning of 1601, the year in which Knollys entertained the Queen at Caversham, it was the Earl of Pembroke who was found to be culpable, while Knollys moralized about ‘he man of sin’ by whom ‘the true husbandman was beguiled’. Four years after this episode, and a few weeks after his first wife’s death, Knollys married the 19 year-old daughter of the Earl of Suffolk, whose appointment as treasurer brought Knollys the mastership of the wards, but whose disgrace in 1618 lost him more than that position. Knollys first tried to sell the appointment, then thought of ‘standing to the law’, but in January 1619 he surrendered his patent to the King and retired to his estates. The King

told him that, having been long servant to Queen Elizabeth and him, he was loth to remove him, neither would he accuse him of negligence, insufficiency or corruption, but only he had one fault ... which could not stand with his service nor of the state, that he was altogether guided and overruled by an arch-wife.

John Chamberlain’s report that Knollys was discharged from the Privy Council at the accession of Charles I has not been confirmed, though his earldom may have been intended as compensation for his continued compulsory retirement. He was given precedence over six others because he was believed to be childless, but in 1627 his wife gave birth to a son, about whose legitimacy, and that of a younger brother, there has been endless dispute. The sons were not mentioned in Knollys’s will, a simple revocation in May 1630 of all former wills. He died 25 May 1632, and within five weeks his widow, a ‘professed papist’, married Edward, 4th Lord Vaux of Harrowden, whom she had known before her marriage to Knollys.6