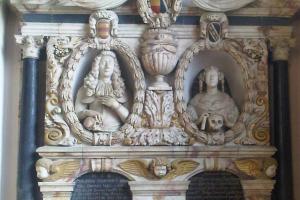 Harcourt’s ancestors were established in Oxfordshire by the early 13th century, and first represented the county in 1322. But the property had been seriously embarrassed by his grandfather ‘in chimerical pursuits’, and his father was forced to become a soldier of fortune. He returned from the Low Countries to command a regiment of foot in the Bishops’ wars and the Irish rebellion, but was mortally wounded in an attack on Kilgobbin Castle. Harcourt’s mother, a devout Puritan, remarried the parliamentary general Waller and the family connexion was strengthened by his own marriage to Waller’s daughter. At the Restoration he received a knighthood, presumably in recognition of his stepfather’s services. Although he conformed to the Church of England, his chaplains were Presbyterian.3

Harcourt owed his election for Boston in 1666 to the sitting Member, Sir Anthony Irby, who had married his aunt. He was an inactive Member of the Cavalier Parliament, in which he was named to only 33 committees, and made seven recorded speeches of little political significance. He was appointed to the committee for the private bill promoted by Thomas Horde in 1670, but became more active in the early years of the Danby administration. He was appointed to the committee of inquiry into the state of Ireland in 1674, and to those to appropriate the customs to the use of the navy, to prevent the growth of Popery, and to report on scandalous and dangerous books in 1675. He contributed to the debates in the autumn session on the challenge to William Cavendish, Lord Cavendish, from Thomas Howard, a Roman Catholic who, he declared, had reflected on the whole House. When it was proposed on 18 Nov. to request a conference with the Lords ‘for avoiding the occasions of reviving differences between the two Houses in matters of appeal’, Harcourt was teller for retaining the last four words. In 1676 Sir Richard Wiseman observed that he had ‘little hopes’ of Harcourt and Irby. The court party tried to exploit an incident of 29 Mar. 1677 involving Harcourt and his friend Andrew Marvell, but the House accepted his explanation that ‘Marvell had some kind of a stumble, and mine was only a thrust, and the thing was accidental’. Shaftesbury marked him ‘thrice worthy’ at this time. He spoke again briefly on 30 Apr. 1678 about an assault on a servant of Sir John Coventry, and on the same day he was appointed to the committee to summarize foreign commitments. ‘Of a generous and sweet nature’, Harcourt apparently had little stomach for the animosities of the last session of the Cavalier Parliament. He was given leave to go into the country on 17 Dec. 1678, and made way for William Ellys at the general election.4

Harcourt stood unsuccessfully for Oxfordshire as an exclusionist in August 1679, and was removed from local office. Though he received no encouragement from Shaftesbury, he was successful in 1681, but left no trace on the records of the Oxford Parliament. At the time of the Rye House Plot it was reported that Sir William Waller II was staying with him, but no action was taken. He died on 30 Mar. 1688 and was buried at Stanton Harcourt. His eldest son, a barrister, sat for Abingdon and other constituencies as a Tory from 1690 until he became lord keeper in 1710.5