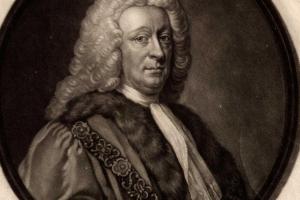 Barnard was born into a prosperous Quaker family. His father, a wine merchant, came of yeoman stock in Goathland, Yorkshire, where he bought up his brother’s lands, leaving them to Barnard. His mother, whose family’s property at Play Hatch, near Reading, was mortgaged to her, also left him land at Prested Hall in Essex. He gave up the Quaker faith in early youth, when he is said to have been baptised into the Church of England by Compton, bishop of London. He became a staunch Anglican, supporting Dr. Sacheverell, as well as the Schism and Occasional Conformity Acts passed by Anne’s last Tory Government. In 1732 he told the House of Commons that

he would have the clergy distinguished with favour who were Tories in the Church and Whigs in the State, not high flying Tories, but moderate ones who were for preserving the Church doctrines without violence and persecution, men at the same time who would exert themselves against Popery, which makes great advances in London.

As lord mayor of London in 1737 he incurred criticism by exacting fines from Dissenters for not serving as sheriff, which they could not do without taking the sacrament of the Church of England. The same Tory church principles would account for his opposing the repeal of the Test Act in 1734 and bills for naturalizing foreign Protestants and Jews in the 1747 Parliament.1

Barnard began as a wine merchant, combining this with marine insurance, which soon became his chief business. In 1720 he was chosen by the London underwriters to state to the Government their case against allowing two new insurance companies, the Royal Exchange and the London Assurance, to conduct marine insurance. His representations were unsuccessful, as was his subsequent attempt to secure a charter of incorporation for the underwriters; but no doubt the reputation which he gained from this affair helped to lead to his adoption for the city of London in 1722 as an independent Whig candidate. During the election his opponents wrote of him in the Freeholders Journal of 9 Apr.:

There is a person of another nature and disposition, who affects to be the governor of them [the other candidates] as well as of us; one who is busy, furious, clamorous and loquacious, of late a speech-maker, a Christian and a patriot; who understands our refined politics and our religion comprehensive of all sects whatsoever. This is the character he is ushered in with, or rather with which he ushers in himself, but he may draw his own picture as he pleases, for we are ignorant even of the features of his face. This indeed we know, that before he was known as a candidate, which was the first time he ever was known, he set up himself, declared in public coffee-houses his intentions, how, in what manner, he would manage us; whom he would join, and whom he would reject. As if he had already monopolized us, and the sole command of our liberty, our property and our votes were vested in him.

He was also attacked for his attempt to form a marine insurance corporation, to which he replied by distinguishing that project from the bubble companies of that time. He was returned and continued to represent London for nearly 40 years.2

In his first Parliament Barnard took an independent line, speaking against the Government on the army, 26 Oct. 1722, opposing the city of London elections bill, which gave the aldermen a veto on the decisions of the common council, but supporting Walpole against an opposition demand for an inquiry into the national debt in February 1726. Throughout the next two Parliaments he acted consistently with the Opposition, becoming one of their principal spokesmen, especially on trade and public finance. In his opposition he reflected the views of his constituents, the small merchants, tradesmen, and master craftsmen of London, who hated Walpole, because they believed that ‘he never did anything for the trading part of it, nor aimed at any interest of theirs but a corrupt influence over the directors and governors of the great monied companies’.3 In 1730 he presented a petition against the monopoly of the East India Company. In 1731 he attacked the Charitable Corporation, and in 1733 he promoted a bill against ‘the infamous practice of stock-jobbing’, which, if it had been enforced, would have prevented the development of the stock exchange.

Barnard’s dislike of Walpole was increased by the excise bill, which aimed at stopping the frauds on the revenue by putting wines and tobacco under the excise department instead of the customs. Himself a wine merchant, he joined with Micajah Perry, a tobacconist, in heading the opposition to the bill, which he was considered to have done more than any other Member to defeat. In 1737 Walpole was said to have offered Barnard the chancellorship of the Exchequer, but ‘Sir John absolutely refused it, saying it was a laborious and envied place, by which he could honestly get but £4,000 a year, and so much he gets by his trade without trouble’. A further clash occurred later the same year, when Walpole procured the rejection of Barnard’s scheme for reducing the interest on the national debt from 4 to 3 per cent, to avoid ‘disobliging the moneyed men in the House of Commons’. Barnard was believed at Westminster to have made himself so unpopular by this proposal that he would be passed over for the office of lord mayor, to which it was his turn to be appointed. It was also reported that his insurance business would be ruined

by a combination of the merchants, for they have agreed not to insure their ships with him, and his whole fortune is, they say, but £6,000, having had great losses of late, besides an extravagant son.4

But he was duly elected lord mayor, and his business does not appear to have suffered. At the end of his term he received one of the warmest eulogies ever received by a lord mayor from the common council. About this time Lord Cobham included a bust of him among the nine contemporary worthies thus commemorated in the gardens of Stowe.

When the Opposition split on Walpole’s fall, Barnard took an independent line, refusing office for himself but accepting a commissionership of stamps for his son. After Carteret, now Granville, had been forced out by the Pelhams at the end of 1744, Barnard delivered, 23 Jan. 1745, a panegyric on his Administration, as ‘more glorious for this country than any ... since 1710’, warning ministers that ‘the closer they followed the steps of their predecessor, the better opinion he should entertain of them’. A fortnight later, 6 Feb., he attacked the terms of the recent war loan as extravagant, calling on the Government to throw the under-writing of loans open to the public, instead of confining it to a small group of monied men and institutions.5 He followed this up, 12 Feb., by speaking for a bill promoted by the London corporation to abolish a longstanding grievance, the aldermen’s veto on the proceedings of the common council, but it was opposed by Pelham and rejected.

After the collapse of the rebellion, during which Barnard enhanced his standing by rallying loyal elements in London to the support of the Government, while the Jacobites, headed by his rival, George Heathcote, were discredited, Pelham determined to make an attempt to placate Barnard and through him the London corporation. With this object the bill for abolishing the aldermen’s veto, which was re-introduced 24 Jan. 1746, was passed by the Commons 13 Feb. and became law. But when Pelham brought in, 10 Mar. 1746, his proposals for a new loan, Barnard again attacked them as extravagant, making counter-proposals, which were rejected because, though they were cheaper than Pelham’s, ‘it was not sure that the moneyed men of the City, who were to support [them] were able to raise the money proposed; whereas those who engaged with Mr Pelham were sure men’. However with the followers of the Prince and Lord Bath voting in the minority, the friends of the Government had misgivings. On 20 Mar. Chesterfield wrote to Newcastle:

Your victory over Sir John Barnard and co. was complete, and yet I wish the minority had been much less; it is the embryo, and not a very small one, of an Opposition that may grow very considerable.6

So Pelham himself seems to have thought, for in the following December, soon after the opening of the next session, he agreed that the 1747 loan should be raised by open subscription as recommended by Barnard, who should himself be the chief organiser of the would-be subscribers. As a result, in the new Parliament which was elected that year, Barnard, who in April 1746 had been classed among Granville’s followers, was put down by Newcastle as a government supporter.

By winning over Barnard, then at the peak of his popularity in London, where a statue of him was erected that year in the Royal Exchange, an unprecedented honour, Pelham not only disarmed the anti-government forces in the common council, but secured for his financial operations the support of its influential representative, whose views on finance were particularly respected in popular circles. The value of that support was shown when Pelham in 1749 introduced his scheme for reducing the interest on the national debt from 4 to 3 per cent. The scheme was drawn up in a consultation with Barnard, who took part in the drafting of the legislation and, when it showed signs of foundering, like his own scheme in 1737, on the opposition of the great monied companies, published a defence of the measure, which was successfully carried into effect.

Though Pelham, and after him Newcastle, as heads of the Treasury, made a point of consulting Barnard on financial matters, in practice they continued to rely on the small group of monied men and institutions, whom he deeply disliked, but they carried out their operations with such tact that they did not lose his support. His only opportunity of trying out his own financial ideas, unhampered by the Treasury and the ‘monied interest’, was given him by H. B. Legge who, as chancellor of the Exchequer in the short-lived Devonshire-Pitt Administration, 1756-7, adopted Barnard’s proposals for raising a loan of £3½ millions by issuing £1 million one guinea lottery tickets and £2½ million annuities. It has been said of these proposals that their advantages were that if they were successful the money would be raised without permanent increase to the national debt and at a very moderate rate; their disadvantage was that they were extremely unlikely to succeed. The lottery, which even Barnard’s friends recommended to the public ‘rather as a patriotic duty than as a profitable speculation’, brought in no more than £60,000 three months after it had been opened. The annuities, made unattractive both by the complexity of the scheme and the rates at which it was offered, produced only £313,000 towards the £2½ million required. In the end the leaders of the monied interest raised the money by the traditional means of a closed subscription, despite the opposition of Barnard, ‘whose abilities in points of credit’ they were said ‘to rank no higher than a schoolmaster who can teach boys to cast sums but not teach a man where to get credit for them’.

By this time Barnard’s leadership of the popular forces in London was being successfully challenged by William Beckford. In August 1756 Beckford’s organ, which had hitherto treated him with the greatest deference, made a vicious attack on him, asking its readers:

Would not ... that capital ship, the Sir John, if thoroughly examined by a skilful master in politics, be found most confoundedly eaten by ministerial worms, and perhaps be reported so rotten and crazy as not to be trusted on any future service?