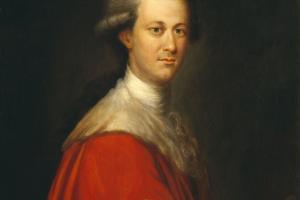 We have here a very odd young man ... the son of Lord Lyttelton, one who has already taken a resolution to make himself considerable by opposition, and whose ambition will bear no control. If he does succeed, it must be by the force of that and the harshest means only, for his contradictory temper makes it impossible for him to agree with anybody, and his behaviour in general disobliges and offends so that he is shunned both by the English and Italians, whom he in return despises ... On his return to England he must soon make himself be talked of, as he has given occasion in every place he has passed through, much to his disadvantage.

He returned to England with the reputation of a rake and bounder; quarrelled with his pious father; and went again to the continent, where, among other adventures, he got himself imprisoned in Paris. Mrs. Montagu, his father’s friend, wrote of him:1

One would do a great deal to extricate a young man from the distresses inexperience and ignorance of the world brought him into; but Mr. Lyttelton has so many times acted over the same indiscretions that to assist him again would only be to encourage him in his vices.

He stood at Bewdley on the family interest, and was returned after a contest. Two speeches by him are reported. On 18 May 1768 he said: ‘There are more things of importance to be done than the affairs of Wilkes. Some late accounts have brought us news of redoubled violences from America.’ And 14 Nov. he spoke for hearing Wilkes’s petition.2 On 25 Jan. 1769 he was unseated.

He later wrote of his short career in the House of Commons:3

It is a matter of indubitable certainty with me that if I had kept my seat in Parliament most of the unpleasant predicaments in which I have been involved since that time would have been avoided. I was disposed to application in the political line, and was possessed of that ready faculty of speech which would have enabled me to make some little figure in the Senate. I should have had employment; my passions would have been influenced by a proper animating object; and my vanity would have been sufficiently satisfied. During the short time I sat in Parliament I found myself in the situation I have described; I was pleased with the character; I availed myself of its privileges while I possessed them; I mingled in public debate, and received the most flattering testimonies of applause.

After succeeding to the peerage he led a more regular life, and took a prominent part in the debates of the House of Lords. He was a strong advocate of the British cause against the colonies, and was given sinecure office. But he turned against Administration in April 1779; and was about to be dismissed4 when he died on 27 Nov.