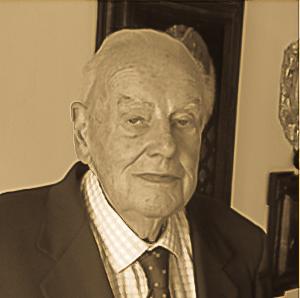 Sir Clive Bossom was born in New York on 4 February 1918 and returned to England as a child before attending Eton. Bossom’s childhood was dominated by a plane crash that killed his mother and older brother, bringing him much closer to his father. During the war he served in Europe and the Far East in the Royal East Kent regiment, leaving the army in 1948 with the rank of Major. He married Barbara North, proposing to her during his 1951 election campaign, and they had four children together.

His father was a Conservative MP before he entered the Lords, whose influence in Kent helped Sir Clive become first a County Councillor and later Conservative candidate for Faversham. Sir Clive lost twice in the 1950s before winning in Leominster (1959). During his time on the backbenches his Private Members’ Bill, the Antarctic Treaty Bill, was passed helping ratify an agreement to protect the continent’s environment. Bossom stood down from Parliament in 1974, having succeeded his father as 2nd baronet, to pursue a business career. He was later known for his involvement in motorsport.

Sir Clive died in March 2017, and we have featured his interview on our blog.

Click here to listen to the full interview with Sir Clive Bossom in the British Library.

Then I had a fascinating year and a half in Hong Kong. The war of course had finished and it was a completely new world to me. It gave me time to think of what I wanted to do for the future. There I think I got the idea that politics, having seen so much father had done, and how interesting it could be. I wasn’t really qualified, then, to do anything else… So I thought let’s have a go at politics, it was the reason I resigned my commission and came back. As I said before, I was very lucky to find I could go into local government. I fought Maidstone East on the Kent County Council, and it was quite a battle, I fought it like a general election really. It was father’s political opponent who was chief whip of the Labour party in the county council, so it was a good thing to get rid of him, because he’d made a lot of publicity in local government affairs.

Track 1 [00:00:24] [Session one: 2 July 2012] Hon. Sir Clive Bossom [CB], born New York, 1918. Introduction.
Track 2 [01:16:41] Description of early life in USA. Description of return to UK in 1927 and death of his mother and brother Bruce in flying accident in 1932. Reflection on subsequent strengthening of relationship with his father Sir Alfred Bossom [AB]. Remarks on initial ambition to become a diplomat, and then joining The Buffs (The Royal East Kent Regiment). Comments on being adopted by Maidstone East County Council in 1948. Remarks on fighting Faversham seat in 1951 and 1955. Comments on subsequent move to Herefordshire and election as MP for Leominster in 1959. Description of AB’s career as an architect in USA and marriage to American Emily Bayne [EB]. Remarks on Eton. Remarks on AB’s involvement in slum clearance and subsequent move into politics. Remarks on Winston Churchill’s request for AB to look into pre-fab houses. Remarks on AB’s interest in Europe and AB’s advice to CB to join supplementary reserve as AB could see war coming. [11:25] Remarks on joining AB on Inter Parliamentary Union trips after the war. Comments on CB’s interest in foreign affairs as a schoolboy. Reflection on travelling to USA with AB after EB’s death. Description of EB’s musical connections both in New York and London. Remarks on CB’s travels with AB as a child. Comments on Eton. Remarks on attending church. Description of London neighbour Bishop Michael Marshall. Detailed description of entering army. [24:40] Description of time after school studying European languages. Remarks on war service. Description of landing in France, encountering hostility in Le Havre and being stationed at Arnhem. [28:40] Detailed description of flying missions with Polish pilots to locate enemy mortars. Remarks on post-war posting to take two Persian kittens to Lady Mountbatten in Ceylon. Comments on postings in Asia. Comments on resigning commission and deciding to go into politics. Remarks on fighting AB’s political opponent for seat on Maidstone East County Council. Further comments on war experiences and AB’s experiences in Home Guard at Westminster. Remarks on younger brother Doric Bossom [DB]. Remarks on CB working as AB’s PA and chairman of Adopted Parliamentary Candidates committee. Detailed remarks on AB’s political life and CB not wanting to take AB’s seat over. Description of social parties held by AB and AB’s sympathy for politicians’ wives. [44:15] Remarks on being adopted to fight Faversham. Comments on Edward Boyle, Keith Joseph, Iain Macleod. Remarks on being Enoch Powell’s [EP] secretary. Remarks on Michael Heseltine, Nicholas Ridley [NR]. Anecdote about Margaret Thatcher [MT] regretting not making NR chancellor. Remarks on early electioneering in Faversham. Comments on importance of getting experience in local government. Remarks on his own work at county council. Remarks on attending Swinton College alongside MT. [56:12] Description of how AB made MT his protégé, MT’s strengths and AB’s advice to MT. Description of AB finding MT seat in Dartford and AB offering to host MT’s wedding. Comments about CB’s own marriage to Lady Barbara North [BB]. Comments about MT being a ‘star’. [59:56]

Track 2 [cont. from 59:56] Story about MT asking CB to be her PPS to please AB. Comments about a recent meeting with MT. Remarks about John Boyd-Carpenter’s support for MT. Remarks on losing Faversham. Comments on AB making CB a name a Lloyds which gave him financial security. Comments on BB’s support during campaign. Lengthy, amusing description of courtship with BB. Description of early married life in Kent. [01:11:00] Comments on MPs’ pay and DB’s advice on being a name at Lloyds. Remarks on being adopted by Leominster. Comments on predecessor Archer Baldwin. Details about  Adopted Parliamentary Candidates committee and his role on selection committee panel.

Track 3 [01:41:28] Remarks on Leominster constituency and Liberal opponents. Comparison to Liberals of 2012. Comments on House of Lords reform and AB being made a life peer. Remarks on House of Lords. Remarks on AB’s reaction to CB winning a seat. Comments on entering Commons as an MP and familiarity with the House. Remarks on AB’s reputation across the House. Mentions help from David Gibson-Watt [MP for Hereford]. Remarks about his interest in agricultural issues and foreign affairs. Mentions presidency of Anglo-Belgian Union, membership of Benelux and Iran groups in the Commons. Mentions being EP’s secretary when EP was shadow Transport Minister. Remarks on interest in transport at Kent County Council. [11:20] Mentions belief that voting should be compulsory and trying to persuade Reggie Maudling [RM] to launch such a campaign. Comments on MT’s mastery of the Beveridge report and MT’s bossiness. Remarks on Hugh Fraser [HF] and HF’s wife Antonia [AF]. Remarks on travelling overseas with HF to promote TSR-2 plane. Various anecdotes about trips with HF. Remarks on relationship with US senator Claiborne Pell, and AB’s work at Pell family estate Fort Ticonderoga. Story about US uncle Howard Bayne [HB] asking AB and EB to leave a son with him in USA. General remarks about being a PPS. Detailed comments on time at Home Office with RM. Remarks on socialising with RM, HF and AF. [26:13] Reflection on how political life affected family life. Remarks on living in Dower House at Eastnor Castle in Herefordshire. Remarks on being regarded as ‘classless’ by locals in Herefordshire. [32:03] Description of living in London next to other MPs Tufton Beamish and Ian Orr-Ewing [and Harry d'Avigdor-Goldsmid]. Comments on constituents’ wishes to be able to approach their MP. Remarks on Leominster constituents’ lives and politics. Comments on his happiness to be elected to Leominster in contrast to AB’s work in Maidstone. Remarks on not wanting Maidstone as he could not match AB’s success and devotion to politics. Remarks on belonging to private dining N.A.A.F.I. club started by Archer Baldwin. Mentions other members Howard Flight, Edward du Cann, Boris Johnson [BJ], Edward Garnier, Lord Cranborne, Lord Clark and Lord Goodlad [and Jonathan Aitken and Richard Shepherd]. Story about BJ forgetting a lunch appointment. Remarks on BJ’s political abilities. Comments on issue of Europe. Remarks on resisting plan to amalgamate Hereford County Council with Worcester. [46:18] Lengthy comments on Harold Macmillan [HM]. Anecdote about attending dinner when HM and Edward Heath [EH] discussed AB’s future on leaving Commons. Comments on importance of the Speaker’s role and capabilities of today’s Speaker [John Bercow]. Comments on EH and MT. Comments on David Cameron. [52:03] Remarks on David Owen. Remarks about reasons for leaving Commons. Remarks on BB taking over AB’s role in guiding and supporting CB. Remarks on starting up Europ Assistance, working for Vosper, running Anglo-Eastern Bank. Remarks on pursuing AB’s idea for Paddington-Heathrow monorail. Mentions BB’s involvement with the St John Ambulance, the National Society for Mentally Handicapped Children, the Spastics Society, the Women’s Conservative Association (West Midlands) and the Habitat Housing Association. Affectionate remarks about BB. [01:00:21]

Track 3 [cont. 01:00:21] Remarks on politicians’ pay. Comments on being a backbencher. Comments on MT’s genuine affection for AB. Comments on AB’s political life. Mentions own inability to pursue similar life. Remarks on belonging to 1900 Club and attending dinners at Carlton Club. Remarks on maiden speech in which he mentioned monorail. Mentions secretary Miss White. Story about winning a Private Member’s Bill in 1966 and Labour party suggesting the Antarctic Treaty Bill. Remarks about Foreign Office writing his speeches and getting the Bill passed. Remarks about trip to Antarctic and his idea to name peninsula in the Falklands after MT. Mentions opposition from Crispin Tickell, president of Royal Geographical Society, and MT’s amusement. Remarks on enjoying Inter Parliamentary Union overseas trips. [01:15:01] Detailed description of trip to Outer Mongolia and visit of Mongolian delegation to UK. Comments on diplomatic nature of trips, visiting schools and hospitals. Remarks on belonging to 1922 Committee, Anglo-Belgian Society and Royal Society of Arts. Comments on AB’s devotion to CB and CB’s children but AB’s refusal to help with school fees. Comments on relationship with AB and AB’s death. Remarks on AB’s and CB’s involvement with Order of St John’s eye hospital in Jerusalem and Iran Society. Comments on Shah of Iran and visit to Iran. Further comments on career after leaving Commons. Mentions AB’s dowry to RSA for annual Bossom Lecture on architecture. [01:31:39] Mentions CB’s membership of RGS, governorship at Oundle school and being offered Lord Mayorship. Remarks on not being a City man. Mentions chairmanship of RAC. Story about his subsequent involvement in restructuring British motor racing. Remarks on being chairman of British Motor Sports Council and involvement with Fédération Internationale de l’Automobile and Formula One. Remarks on Bernie Ecclestone’s contribution to F1. Remarks on moving to Sussex.
Track 4 [0:5:12] Remarks on Winston Churchill’s joke about AB [touching chest and bottom]. Mentions Anthony Eden and Bill Deedes. Remarks on AB’s political aspirations, character, political lunches and writings.
Track 5 [0:3:32] Remarks on his interest in fire brigades and their improvement, liaison with French brigades.
Track 6 [0:14:14] Further remarks on BJ and N.A.A.F.I. club. Further remarks on guidance AB gave to MT. Mentions AB helping Patricia Hornsby-Smith. Remarks on familiarity with Parliament and many MPs on entering Commons. Remarks on serving on committees and relationship with whips. Further remarks on passage of Antarctic Treaty Bill. Detailed anecdote about US reporter telling him about scandal [Profumo] involving a Minister partying at Bill Astor’s house, and CB’s fear that HF was the Minister concerned. Comments on Jack Profumo and the scandal. Comments on need to have a toe in Europe and joining EEC.